I just have to start by saying that you can´t go to Rome without visiting Vatican City, its museum and the basilica, end of discussion.

There are a few thing that is good to know when before making a visit to either the museum inside Vatican or the San Pietro’s basilica that makes the experience a lot smoother.

Number one and perhaps the best advice that I have, book a guided tour to the Vatican museum. Normally I do not like guided tours because I want to walk in my one pace and skip what I want to skip and not always walk in a straight line so I was actually surprised that the guided tour was really fun. Not only was it good to get a guide that could show you where in the museum that best highlights was located, you were allowed to skip the line at the entrance. BIG BONUS!

Vatican Museum has an official webpage where you can book and prepay you tour by credit card. I booked it two days in advance and I suppose that it is best to booking as soon as you know when you want to visit since there are a limited number of tour tickets.

This is the link to the site and I then booked the “Guided tour for individuals”. The hardest part was that I did this on my IPhone (scrolling up and down the not mobile adapted site was a pain…). After everything was booked I got an email with a QR-code that you simply showed to the guards at the museum. They then send directly to the entrance making you skip the two hours que in an instance! The price for the tour and the entrance was €35 and it was money well spent.

Start early with the Basilica of San Pietro. When I woke up I headed straight out to the Vatican and the basilica, grabbing a coffee and a sandwich on my way there. I think I arrived short after eight in the morning, yarn… Anyway, the que to the basilica was perhaps five meter. It was one family with two crying children, a couple of senior citizens and then it was me. Just like at the airport you have to pass a metal detector. They also scan your bags so I could just imagine the que if it was a lot of people waiting. 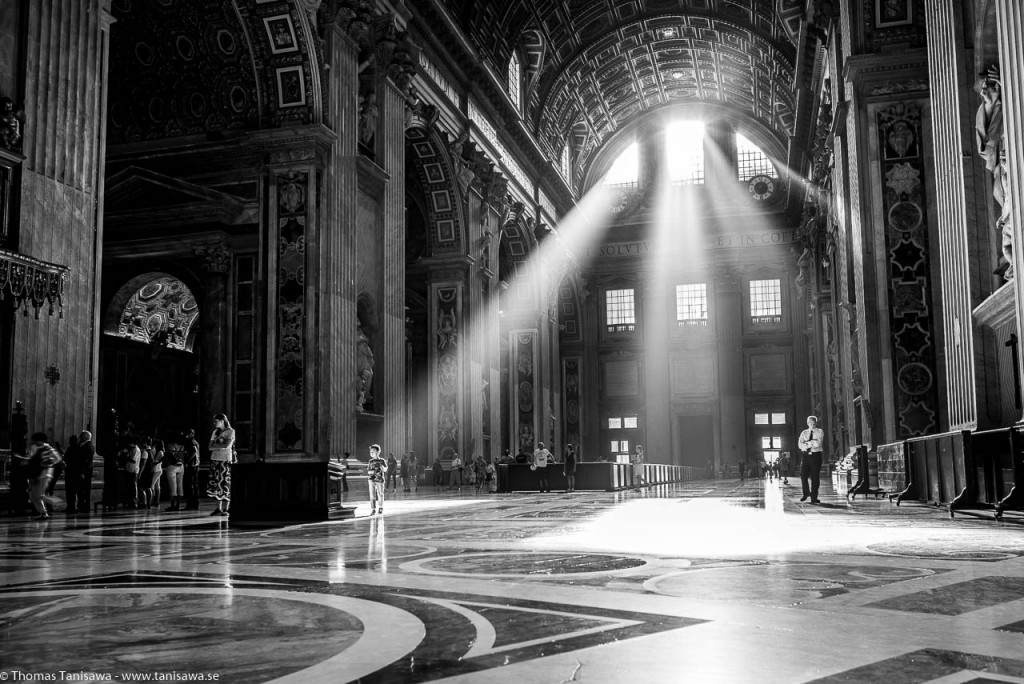 The feeling when entering the basilica di San Pietro is hard to describe. I have seen quite a lot of basilicas and they are all more or less architectural marvels, but this played in a completely different league. To summarize it in one word, WOW! When I entered through the doors an in to the main hall I almost started to laugh because it was so surrealistically huge. And the light that comes in through the “small” windows set the scene perfectly, this is sacred ground. 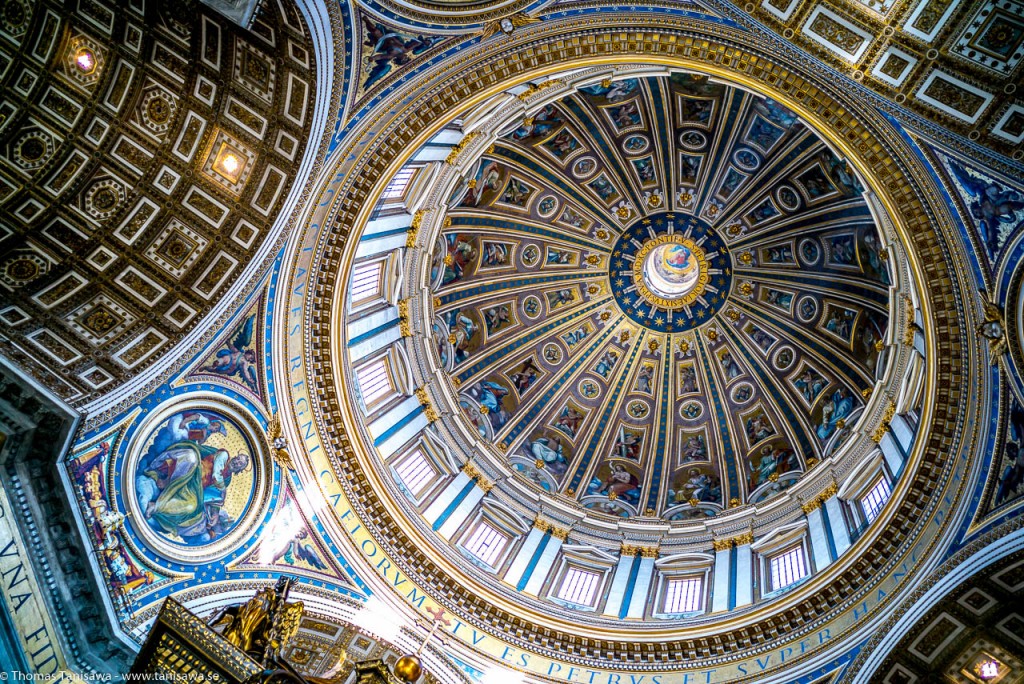 Just by looking up at the dome makes it hard to see how big it really is. It is hard to see in this picture but you can actually walk on a pathway that is located above the text. There is a two meter high fence that on the left and some to the right in this picture. Just take my word for it, it´s there, I walked on it. 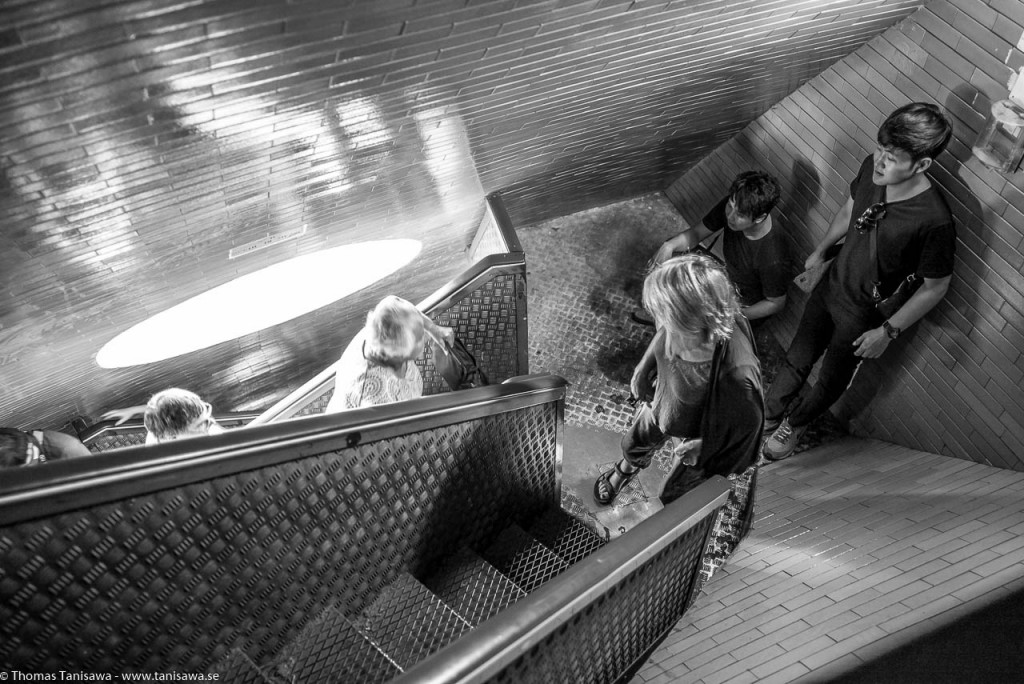 So if you have the strength and will to walk some stairs you could walk to the very top of the dome. I have walked the stair of the Eiffel tower in Pairs, but that was a piece of cake compared to this… It was hot, crowded and you have to lean to the side since the dome shape made it impossible to stand straight. If you do have a small touch of claustrophobia, there are a lot of other places to visit… 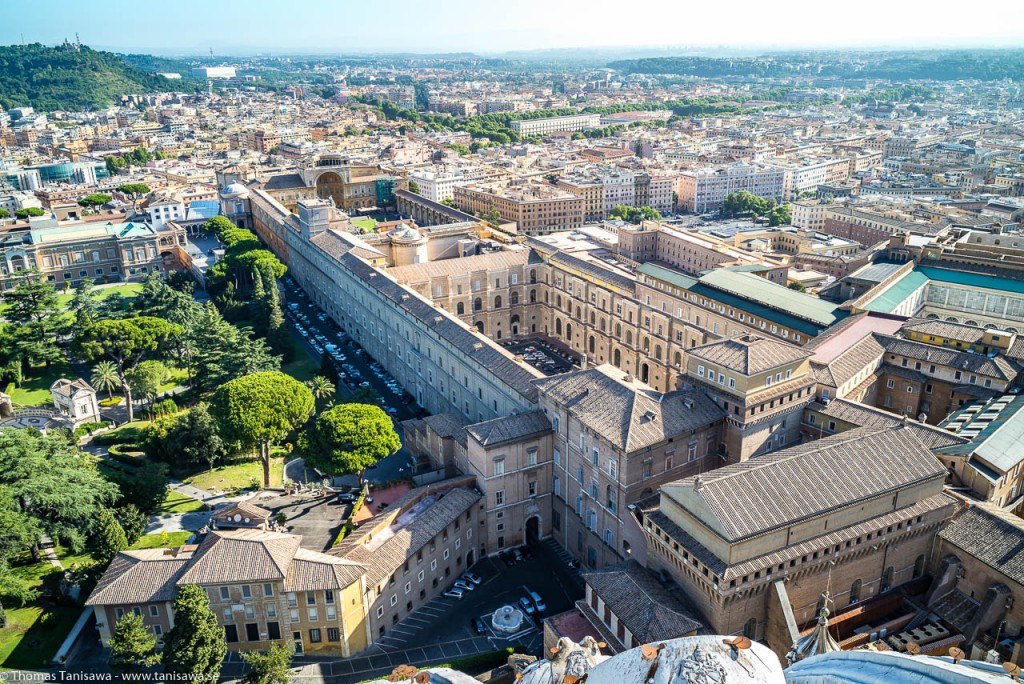 One up at the top of the dome the view was well worth the sweat. The dome is not by far any of the highest point that you can visit but it is perfect for Rome. You are high enough to see all corners of the city. Everything from the coliseum to the Spanish stairs is visible. Just below the dome is the Vatican museum. Almost all the building contains artworks in form of painting, statues, carpets and other spectacular items. 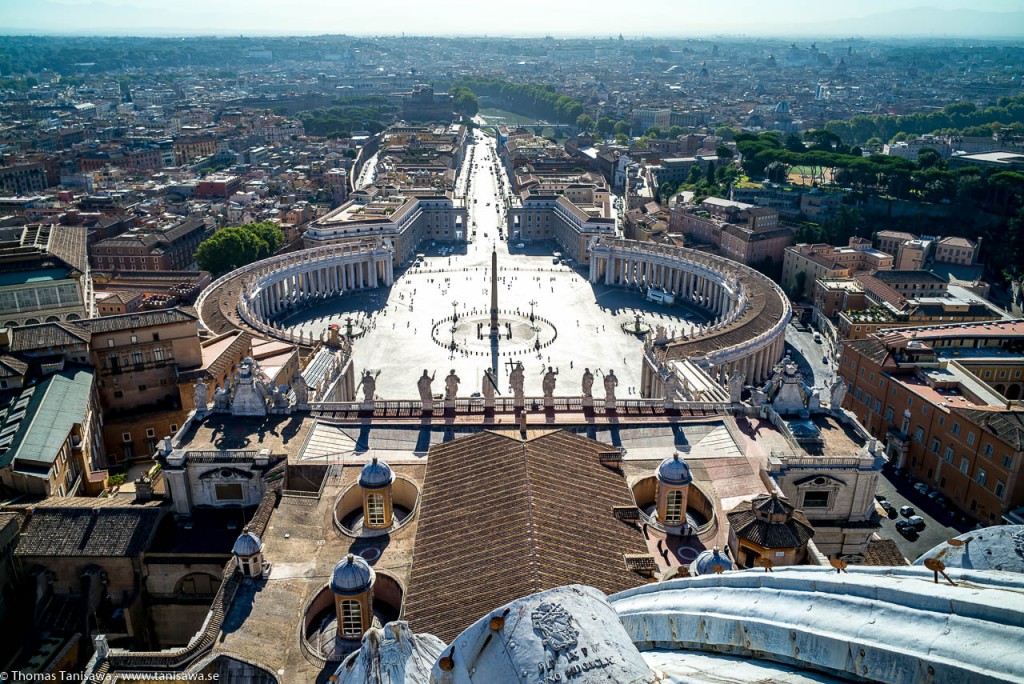 Piazza San Pietro was according to the guide a piazza that in the beginning was completely surrounded with buildings. The broad street leading up to the piazza was ordered by Mussolini and with that decision the original design idea was gone. The original idea was that everyone visiting the piazza would first walk among the houses that surrounds the piazza and then once entering the piazza, get a awesome wow-feeling. 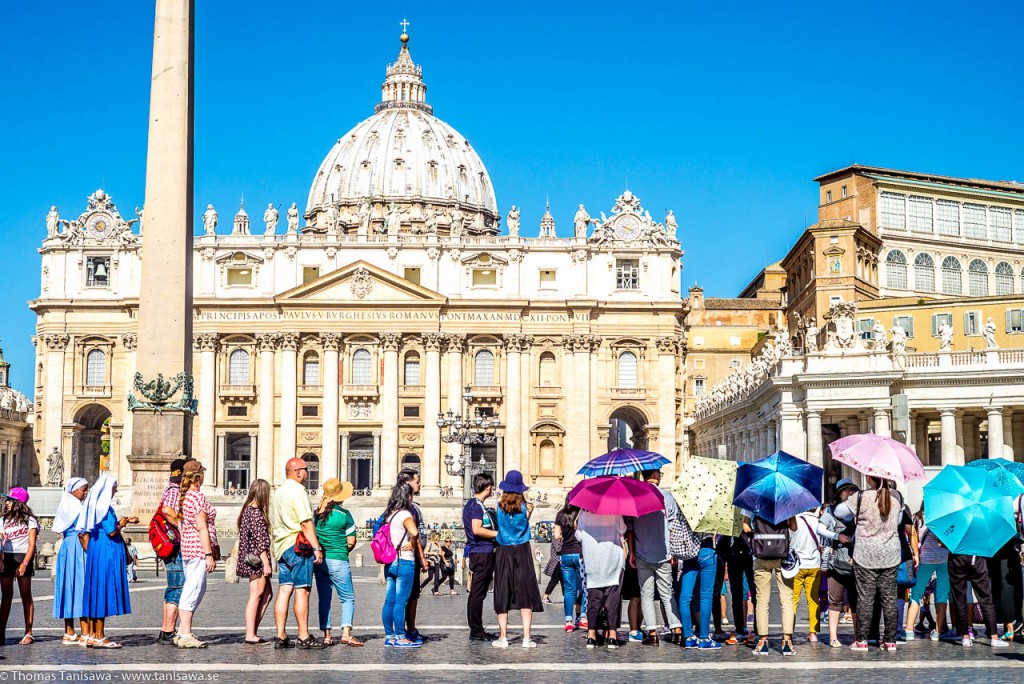 Speaking of queuing. This is the queue to the security control at the Basilica at noon. This picture makes it hard to see but the persons at the end of the queue has one hour in 35 degree Celsius to kill before reaching the security entrance and then, if they want to go up in the dome another hour… 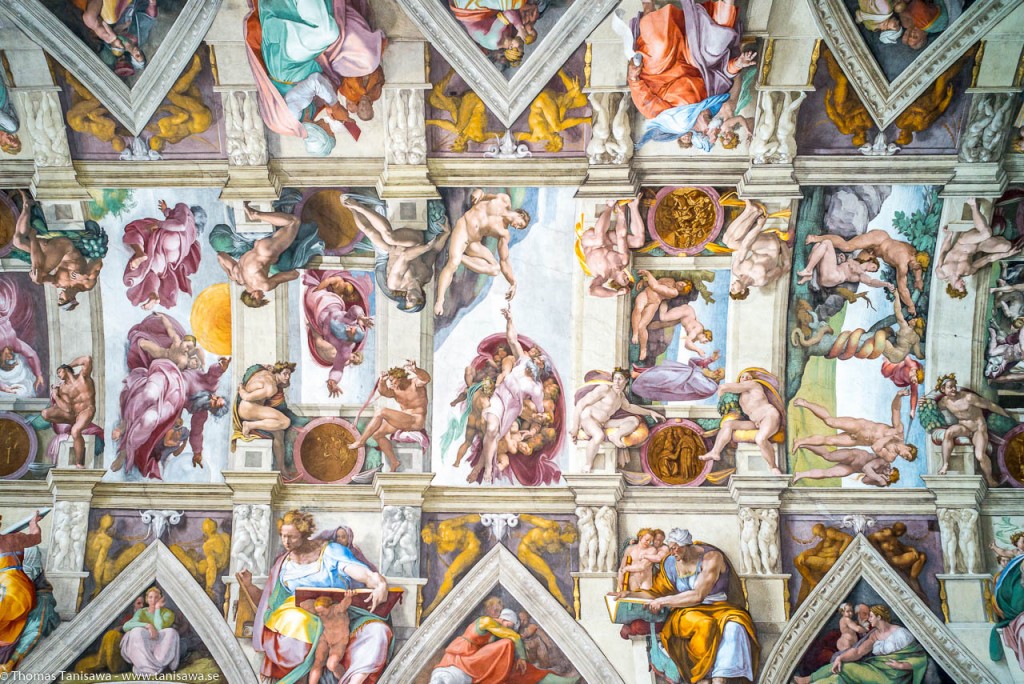 Inside the Vatican museum I didn’t take so many pictures. It was almost too much to see so I didn´t know what to capture with the camera or just with my eyes. Still, this is the one I really want to share, The Sistine chapel. This is the place where the cardinals gather to vote who will be the next pope and of course the place where Michelangelo’s perhaps mot famous fresco covers the complete ceiling. Another wow moment took place here! 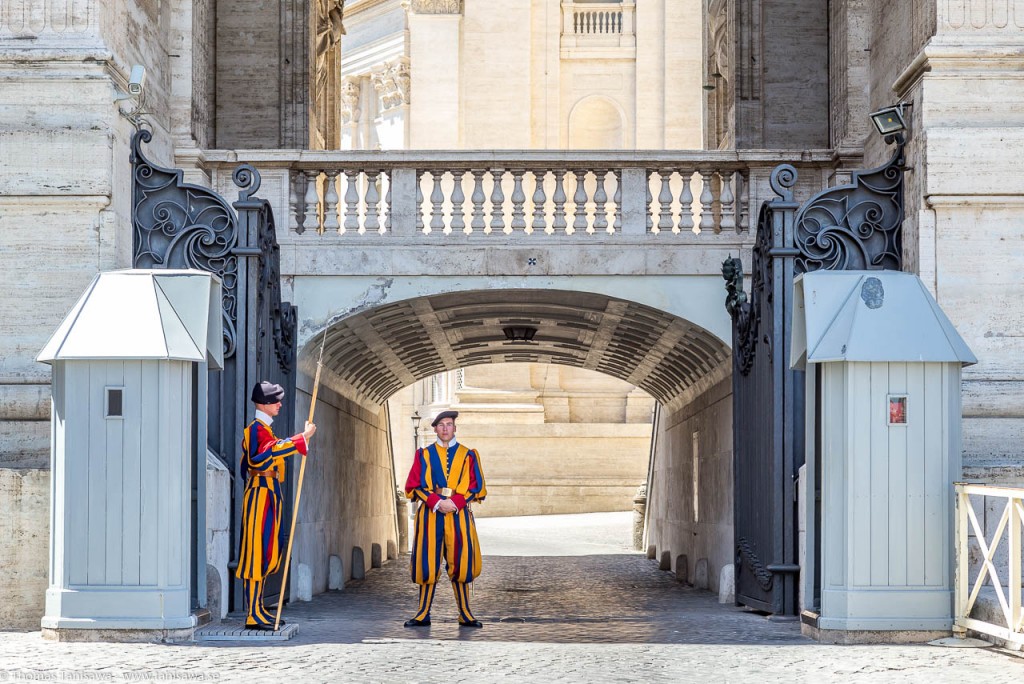 I just have to show this picture of the Swiss Guard standing at strategic places around the Vatican City. The Swiss Guard has been the official guard for the Pope since 1506 and consists of a highly trained group of former Swiss military. To be recruited to the Swiss Guard you must be a Swiss citizen, be at least 175cm tall, catholic, single, have left the military service with a certificate of good conduct and on top of that you need to have a diploma from a higher education… tough, and yes one more thing, you can not be older that 30…

How spectacular this place is during the day it is equally fascinating by night. Every building is lit up and with the black sky as background they look even bigger than during the day. It seems that the piazza is a popular place to visit during the night since it was crowded with people strolling around taking pictures.

Do not miss it!